The province is located in the northeast midland mountainous area of Vietnam. Its terrain has the highest altitude among the 11 provinces of the region. Forest area dominates more than 95% of the province. The remainder is available for agricultural and other uses. Due to this rugged and forested topography, development of water resources has been limited resulting in exploitation of its forest resources; this has caused degradation of the forests. The topography is highly variable, varying from 1,640 meters (5,380 ft) to the lowest point of 40 meters (130 ft). There are numerous rivers and streams flowing through the province, each with small catchment areas. However, most of them have steep slopes and short lengths. Out of the total population, 83% are dependent on agriculture.

The climatic condition of the province is typically tropical monsoonal, which exhibits two distinct seasons namely, the rainy season from May to October rain and dry climatic conditions between November and April. This result in water shortage conditions during the dry months. The annual average temperature is 25oC. The weather has drizzling rain and high humidity in March, April and August.

Bac Kan has untouched natural scenery of endless primitive forest with precious flora and fauna. Thousands type of mineral can be found in this province beside a bunch of interesting sights that attract tourists every year: Ba Be National Park, Dau Dang Waterfall, Puong Cave – to name just a few. Among them, Ba Be National Park is one of the most outstanding attractions need to be included in tourist’s journey to Northeastern Vietnam. It is a reserve set up to protect a freshwater lake (Ba Be Lake – the largest natural fresh water lake in Vietnam) along with surrounding limestone and lowland evergreen forests. The surrounding area is home to members of the Tay minority, who live in stilt homes. There are also many traces and relics from the revolution of Vietnam in the 1940s. ATK, a complex of underground tunnels, is one of the most well-known destinations among these sights. In addition to these tourists’ magnets, Bac Kan is also famous for many traditional festivals of the ethnic group residing there including Thach Long Pagoda festival, Ba Be Lake Spring festival.

Bac Kan Town is 166km from Hanoi. It is located on the Hanoi - Cao Bang inter-provincial No.3. 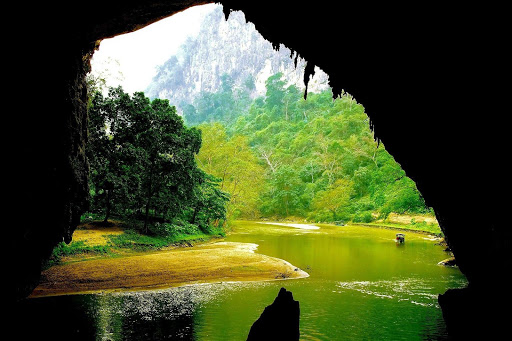