Dien Bien is a province in northwestern Vietnam. It is bordered by Lai Chau and Son La provinces of Vietnam to the east and south, Pu'er City, Yunnan, China, to the north, and Phongsaly Province in Laos to the west. Dien Bien is a new province which was created by dividing the former Lai Chau Province in early 2004, both themselves were once part of the Lan Xang kingdom, then switched ownership to Vietnam during the French Colonial period. Dien Bien includes all the land to the south of the Da River (Black River), and New Lai Chau Province includes all the land to the north of the Da River.

Topography
Dien Bien has a very complex topography formed by high mountain chains running along the West and paralleling Vietnam-Laos border. The mountain chain is 100km length having Pu Den Dinh mountain peak and Phu Sang Cap range. Valleys and streams intersperse between the high mountain chains.
Climate
Dien Bien has a high mountain tropical weather, having two distinguished seasons: dry season and rainy season. Rainy season begins in April and ends in October, highest rain quantity from June to August. Dry season is from November to March. December and January are the driest months. The yearly average temperature: 21- 23oC
Tourism
Attaching with the historic victory of Dien Bien Phu campaign is a wide range of vestiges which are well preserved until present. Each of the vestiges reminds Vietnamese people as well as the international public of a fierce but proud battlefield during resistance war against French invaders. Among those heroic vestiges, the underground hideout of French General De Castries should be the most eloquent evidence of the bravery of Vietnamese troops, who found incessantly for 54 days and nights to seize it. Hill A1, located in Muong Thanh Ward, plays a critic part in controlling the whole battle of Dien Bien Phu campaign. Another indispensible vestige to mention is the command post of Vietnamese soldiers hidden inside the forest of Muong Phang commune. Besides, Muong Thanh Airfield, Doc Lap Hill, Him Lam Hill, Dien Bien Phu Victorious Statue and Dien Bien Phu Victory Museum are recommended to visit. If ones go to Dien Bien from Hanoi, Pha Din Pass is promised to be met on your way. It is called as “Frontier of Heaven and Earth”. Dien Bien is not lack of natural wonders, among which Pa Thom Cave and Pa Khoang Lake the most stunning ones are, each of the sites is named according to the commune it is located. The 21 ethnic groups in Dien Bien also contribute greatly to the advancement of the province’s tourism. They have maintained many unique traditions, festivals, and cuisines, adding to the dynamic cultural life of this Northern Province.
Transportation
The 470km drive from Hanoi to Dien Bien Phu on Highway 6 and 42 takes at least 12 hours. Vietnam Airlines operates daily flights between Dien Bien Phu and Hanoi and it takes 60 minutes to fly from Hanoi to Dien Bien Phu. 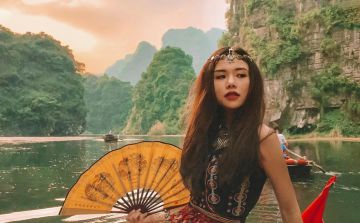 1 Day In Heaven Of Trang An – Mua Cave