Ha Giang Province is a province in northeastern Vietnam. It is located in the far north of the country, and contains Vietnam's northernmost point. It shares a 270 km long border with Yunnan province of southern China, and thus is known as Vietnam's final frontier. The provincial capital, also called Ha Giang, is connected by Highway 2 and is 320 km away from Hanoi. The border crossing is at Thanh Thuy, 25 km from the capital, Ha Giang town. It is one of the poorest provinces of Vietnam as it has mountainous topography with the least potential for agricultural development. The province borders China with a length of over 270 kilometers (170 mi); the border gate is known as the Thanh Thuy. In addition, there are three smaller gates namely, the Pho Bang, the Xin Man and Sam Pun.

The topography of the province of Ha Giang is fairly complex with "temperate, but highly localized montane weather patterns create variable conditions among different regions". It has impressive limestone and granite peaks and outcrops. Ha Giang's complicated topography is divided into three areas. The area on the south has rocky mountain, separated rivers. The west area has sloping mountain side, high pass, valleys, and narrow springs. The low land area includes hills, valley of Lo River, and Ha Giang City. Ha Giang has many beautiful mountains, with high peaks such as Tay Con Linh with 2.419m high, many forests with a lot of precious wood, up to 1,000 kinds of rare medicinal plants.

Climatically, it has two seasons, dry and monsoon, dependent on the altitude of the region. The two northern Indochinese climatic zones on the border influence the climate in that part of the province. The lower areas in the province comprise low hills, the Lo River Valley and the town of Ha Giang. In Cao Bo district, dry season lasts from mid-September until the end of May, and the balance period of the year is the rainy season. However, in Du Gia district the wet season sets in one month earlier. The average annual temperature in the provincial capital of Ha Giang is 22.7°C (73°F); the monthly averages range from a low of 15.48°C (59.86°F) in January to a high of 27.88 °C (82.18°F) in July.

Like Sapa, the most renowned attraction of Ha Giang is the many grandiose mountains. Although mountains here are not as high as Sapa's mountains and seem not to be steep enough to challenge adventurous climbers, they stand out for extensive area of limestone with unique formation of peaky rocks. The most famous rocky area of Ha Giang is Dong Van Rock Plateau, which is recognized by UNESCO as one of 77 geological parks in the world. Lung Cu Hamlet lying inside Dong Van Rock Plateau is another indispensible destination as it marks the very northern tip of Vietnam by Lung Cu Flag Tower on Dragon Mountain. Not only that, Ha Giang is a venue of fanciful natural caves such as Phuong Thien Cave, Chui Cave, Fairy Cave and Swallow Cave. Ha Giang is also well-known for its magnificent forests in which there are more than 1,000 species of good woods, drug trees as well as animals like tigers, peacock or pangolin. This mountainous province's residents consist mainly of ethnic minorities with a major of Hmong, Tay, Dao and Nung ethnic groups. Each of the ethnic group has its unique custom in term of wedding, worship, festivals or funeral. A unique spot only be seen in Ha Giang is Khau Vai Love Market. The market-day is held monthly only on the 26th and 27th of a Lunar Year. Lunar New Year seem to be the best time to visit Ha Giang when ones can see a wide variety of traditional customs of ethnic minorities here, such as celebrating success, rain ritual, sons ritual, crossbow shooting competition, pan-pie performance or "Con" throwing competition. Transportation Ha Giang Town is 320km from Hanoi. Ha Giang is on National Highway No.2, 34, 279 linking to Yen Bai, Cao Bang, Lao Cai provinces in turn. 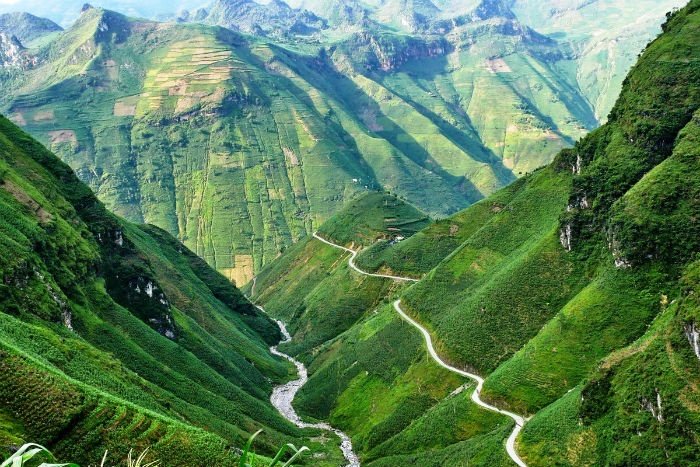