Thua Thien - Hue Province is located in Central Vietnam. It is next to Quang Tri Province to the north, Danang to the south, and Quang Nam Province to the south-west. This province leans up against the Truong Son mountain range and is washed by the East Sea, along its 120km seashore. It is about 700 km south of the national capital of Hanoi and about 1100 km (690 mi.) north of Ho Chi Minh City, the country’s largest city, formerly known as Saigon. Vietnam’s 19-20th Century capital under her last royal dynasty, Hue is a quiet and attractive city to some of Vietnam’s most impressive feudal remnants. Hue originally rose to prominence as the capital of the Nguyen Lords, a feudal dynasty which dominated much of southern Vietnam from the 17th to the 19th century. In 1775 when Trinh Sam captured it, it was known as Phu Xuan. In 1802, Nguyen Phu Anh (later Emperor Gia Long) succeeded in establishing his control over the whole of Vietnam, thereby making Hue the national capital.

The province accommodates the Tam Giang - Cau Hai Lagoon, the largest lagoon in Southeast Asia, which has 68 km in length with 22,000ha of water surface. The province comprises four different zones: a mountainous area, hills, plains and lagoons separated from the sea by sandbanks. It has 128 km of beaches. The mountains, covering more than half the total surface of the province, are along the west and southwest border of the province, their height varying from 500 to 1480 meters. The hills are lower, between 20 to 200 meters, with some points at 400 meters, and occupy about a third of the province's area, between the mountains and the plains. The plains account for about a tenth of the surface area, with a height of only up to 20 meters above sea level. Between the hills are the lagoons which occupy the remaining 5% of the province's surface area.

Owing to its rich historical past, this region is utterly attractive and has a lot to offers: the magnificent Hue Citadel and hundreds of pagodas, sumptuous beaches as well as a dazzling traditional culture and culinary art (many dishes and tasty cakes are exclusive to this area). The provincial capital of Thua Thien – Hue is one of the imperial capitals of the country that has been kept intact. On the northern bank of Perfume River has relics consisting of palaces, which were constructed as arc defensive ramparts with 11km length. This valuable construction includes more than 100 architectural works which were extremely reflected the life of Emperors and mandarins under reign of Nguyen. Situated in the middle of hills on the southern bank of Perfume River are very beautiful tombs of Kings Nguyen. Among these tombs are the four famous ones with the name and the arrangements of the tomb reflected each Emperor's points of view, personality and tastes. This is majestic Gia Long Tomb, imposing Minh Mang Tomb, poetic Tu Duc Tomb and magnificent Khai Dinh Tomb. Hue is also an important center of Buddhism. In Hue and its surrounding still exist tens of pagodas constructed more 300 years ago, and a hundred of temples and pagodas built in the early century. Besides, Hue is a place where the royal music is originated, and a place with traditional famous dishes and sophisticated handicraft. As a unique city of Vietnam still remains its form of City under Middle Age and the constructions of monarchic, Hue has become a big and invaluable museum. Therefore, vestiges in Hue ancient capital have been classified by the government as a very precious property and on December 1993 Hue has been recognized as a World Cultural Heritage Site by UNESCO. In addition, “Nha Nhac” – Vietnamese Court Music was recognized as World Intangible Heritage on November 2003. 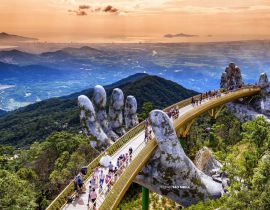 If Hanoi has One-pillar pagoda, Hue is renowned for its Thien Mu pagoda. The architecture,... 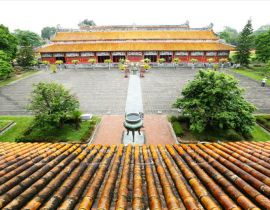 Hue is probably the best city in Vietnam for cycling. There is less traffic than the other... 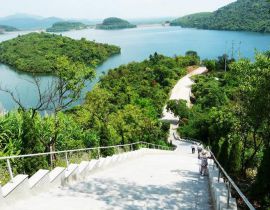 With close proximity to both Hue and Danang, Bach Ma national park is simple a...