Located in center of Red River Delta, in the Northern Focal Economic Zone and the Hanoi – Hai Phong – Quang Ninh Economic Triangle, Hung Yen shares border with Bac Ninh Province on the north, Ha Nam Province on the south, Hai Duong, Thai Binh provinces on the east, and Hanoi on the west.

Topographic features of Hung Yen are flat without hills and mountains, lower from the North to the South and from the West to the East. Terrain is quite event and flat with many rivers like Hong, Luoc, Cuu An, Ke Sat rivers surrounds three sides of province. In addition of that, there are Kim Nguu, Nghia Ly, and Bac Hung Hai rivers.

Like other provinces in the Red River Delta, Hung Yen is also affected by the hot and damp tropical monsoon climate. Every year, there are two separate hot and cold seasons in the province. The sun shines on average 1,519 hours per year and the average number of sunny days is per month is 24. The average temperature is 23.2 °C in the summer and 16 °C in the winter.

Now Hung Yen is a totally different city but much of its heritage has been preserved with many famous pagodas, temples and historical sites such as Pho Hien relic group, including Van Mieu, Hien, Chuong pagodas, Mau Temple. Other popular sites are Kim Chung, Huong Lang, Thai Lac, Ne Chau pagodas, Chu Dong Tu, Phuong Hoang, Dau An, Da Hoa temples. Pho Hien is a historical site in Hung Yen Province, about 70 kilometers southeast of Hanoi. In the 15th to 18th centuries it was a famous merchant port in Vietnam and it was a small historic town on the banks of the Red River. Especially, the prosperous time of Pho Hien was associated with the golden time of the trading relationship between Vietnam, China and Japan. Like the ancient town of Hoi An, Pho Hien is a favorite destination of Japanese tourists. Pho Hien area covers five square kilometres running from Dang Chau Hamlet in Lam Son Ward to Ne Chau Hamlet in Hong Chau Ward. Coming to there, visitors enjoy traditional songs such as cheo, ca dao, trong quan or take part in Chu Dong Tu, Tu Phap, Co Le, Tho Hoang hamlets festivals. Chu Dong Tu Temple Festival is held from 10th to 12th day of the 2nd lunar month. It honored Saint Chu Dong Tu who introduced new agricultural techniques and developed trade for the local. Especially, Hung Yen's cape-longan is very well-known. This sweet longan with a thick pulp and a thin peel, used to be offered to kings only in the past. 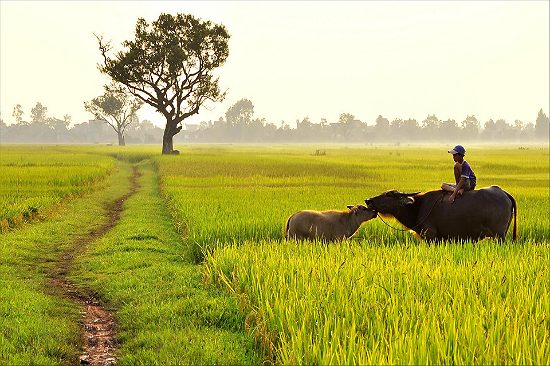