Kien Giang province located in the Mekong Delta region of southern Vietnam. It is known for fishing and rice farming. The provincial capital is Rach Gia, 250 km from the Ho Chi Minh City. Kien Giang is bordered with An Giang province in the northeast, Can Tho and Hau Giang in the east, Bac Lieu in the southeast and Ca Mau in the south, and Kampot Province of Cambodia (with the 54km border) in the west, Gulf of Thailand in the southwest (with the 200km coast).

Kien Giang is the variety of terrain, from lowland terrain, hills and mountains inland and mountainous areas of the island. Except for the mountainous region of Ha Tien, Hon Dat Kien Luong, the inland terrain is relatively flat, lower from the Northeast to Southwest: North East has an average elevation of 0.8 – 1.2m; the Southwest has an average elevation of from 0.2 to 0.4m. Islands have complex topography, which includes many islands and mountains scattered over the surface of the districts of Phu Quoc and Kien Hai district.

Located at lower latitudes by the Sea, Kien Giang province has an ocean tropical climate; therefore the common characteristic is hot and humid and seasonal rains. The average temperature is 27oC. It is highest in April (29oC) and lowest in January (25.6oC). The average sunshine hours are about 2,500 hours per year. There are two separated seasons: the rainy season is from April to November, the dry season is from December to April next year In general, the climate is quite favorable in Kien Giang: fewer natural disasters, there is no direct tropical typhoon or storm. It is not cold and the light and temperature are quite abundant for living and production.

Kien Giang has plains, fertile rice fields, forests of cajuput and mangrove. Kien Giang coastal area has been determined as a key fishing ground. The sea here is rich of good fishes such as mackerel, shark, blue fish, carp, and shrimp. Phu Quoc's high quality fish sauce is well-known in Vietnam and abroad. This fish sauce smells particularly good since it is made from a small fish, “ca com”, with a high level of protein. The province is favored by nature with landscapes like Ha Tien, and Phu Quoc Island. Ha Tien is a seaside tourist area which offers several beautiful and interesting sites to discover including the Thach Dong Temple, Mac Cuu Temple, and Dong Ho, also called East Lake, but which is actually a bay of the Giang Thanh River. Ha Tien is also endowed with many famous beaches, including Mui Nai, Bai Hon Chong, and Bai Duong. Perhaps the most attractive of the beaches are Bai Hon Trem and Bai Duong; both have yellow sand coconut groves. Kien Giang people are very proud of Phu Quoc – a pearl and an evergreen Island. Located in the Gulf of Thailand, 45km from Ha Tien, 120km from Rach Gia by sea, Phu Quoc is an island district of Kien Giang Province. This is the largest island in Vietnam, covering a natural area of 593km, with a length of 50km, of which the widest area is 25km, 99 hills from the north to the south of the island. This island is endowed with great tourism potentials and seafood. Hence, it is considered as a “Pearl of the Southern sea area”. Other famous sites include the Temple and Tomb of National Hero Nguyen Trung Truc in Rach Gia, Tam Bao Pagoda, the Bird Sanctuary, Tan Hoi Pagoda, and Mac Cuu Tomb. The Anniversary of Nguyen Trung Truc is held annually from 26th to 28th day of the 8th lunar month. He devoted to fight against aggressors to protect the country. Before losing his life, he made this very famous statement, “Only when all the grass in Vietnam is pulled up will there be no more Vietnamese people to fight against French aggressors”.

Rach Gia is 92km from Ha Tien, 116km from Cantho, 182km from My Tho, and 250km from Ho Chi Minh City. Besides, the province owns 3 airports: Rach Gia, Phu Quoc, and Ha Tien. From Ho Chi Minh City, there are daily flights connecting to Rach Gia, and 28 flights per week linking to Phu Quoc. 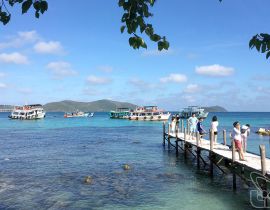 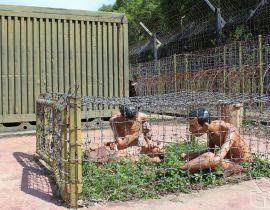 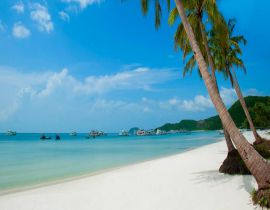 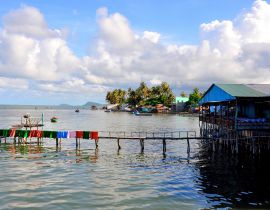