As its location implies, Lao Cai possess a true mountainous yet diverse topography with several valleys lying between hills and mountains. Fansipan – the most famous mountain peak in Vietnam and also the highest peak in the Indochina Peninsula, stands 3,143m above the sea level. This is one of the most precious treasures of Asia, and one of the most visited attractions in the whole country. There are approximately 107 rivers flowing pass Lao Cai, including Red River (the one that crosses Hanoi), Chay River, and Nam Mu River. Such wondrous terrain also give the province more than 30 types of mineral among which cooper, iron and apatite are most valuable.

Lao Cai has typical mountainous climate. The dry season lasts from October to March, it is cold. And the rain season is from April to September. Annual average temperature is 23oC. Snow is reported to have fallen down during some winter, but they are totally the tropical type of snow. The rains only come between April and September, but they are the mild, romantic tropical rains that are worth looking for.

Lao Cai is home to 25 different ethnic minority groups, making it a land of rich cultural as well as historical values. Setting aside Kinh people, H’mong ethnic minority group takes up the largest part of the population, followed by Tay, Dao and Day people. It is the cultural diversity that constitutes the special cultural feature of the land. As a developing mountainous province, Lao Cai’s natural environment remains diverse and fresh. This is a significant feature that makes Lao Cai an ideal tourist attraction for both domestic and foreign tourists. Lao Cai is very proud of Sapa, a unique natural tourist site. Many new married couples like spending their honeymoon in Sapa because of good weather and romantic sightseeing. Visitors to Sapa in summer can feel the climate of four seasons in one day. They enjoy discovering other interesting places including Ham Rong Mountain, Silver Waterfall, and Rattan Bridge, Bamboo forest, Ta Phin Cave and Sapa ancient rock field. Taken place every Saturday night, Sapa Market is an attractive place for visitors who are keen on exploring traditional cultures In addition, Bac Ha Market hosts the biggest fair near the mountainous highlands. It is a typical weekly activity for the H'Mong and other minority groups living in the locality. It would be a mistake if not mention Fansipan peak - the highest peak of Hoang Lien Son mountain range with the height of 3.143 meters. In 1905, the French came to Vietnam and put a landmark on its peak and called it “the roof of Indochina”. Nowadays tourists can conquer it any time of the year; however, the best time to join in this activity is from mid-October to mid-November and in March. During this period of time, there is no more heavy rain which may obstruct the route. Trekking to the mountain from the end of February to March, you will have chance to admire the blooming flowers with brilliant blossoms, violets and orchids. As a frontier province, Lao Cai has the International border gate of Lao Cai – Ha Khau, which accepts tourists from Vietnam to China and vice versa for sightseeing and shopping. This is a popular choice of tourists when traveling to Lao Cai.

Located 300km from Hanoi, Lao Cai can be reached by car or train. There is National Highway No.70, 279, 4D linking Lao Cai to Yen Bai, Lai Chau and Ha Giang, China in turn. There are two trains depart from Hanoi daily to Lao Cai. 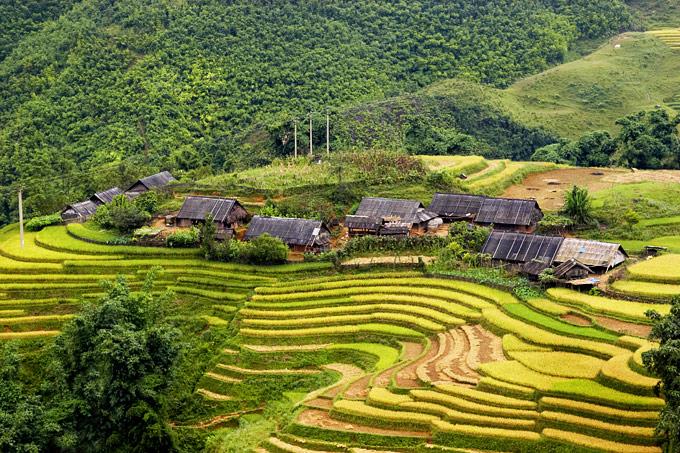 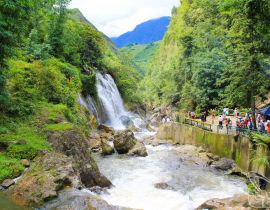 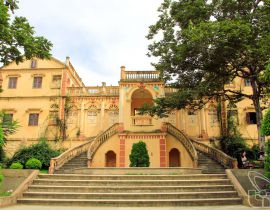