The province has a pretty narrow and steep topography. While 85% of the total area is mountains, there are also other types of terrain such as hills, valleys, highlands, plains, etc. However, almost all of the areas in the West of Quang Binh are mountains, which usually have the height of 1,000m to 1,500m, among which Phi Co Pi is the highest peak. On the East side, there are many beautiful beaches along the seashore.

Possessing a 116.04 km long coastline, Quang Binh has firm foundation for development of tourism, which has been brought about great profit for the land. The province is favored with marvelous landscape with many beauty spots. Phong Nha - Ke Bang National Park is a well-known local attraction which has been recognized by UNESCO as the World Natural Heritage in 2003. The Phong Nha - Ke Bang complex comprises many beautiful caves and grottoes with fantastic stalactites and stalagmites. With mysterious scenery insides, the caves and grottoes have attracted many domestic as well as foreign tourists. Son Doong Cave: the newest cave that was found in Quang Binh province after the famous caves such as Thien Duong and Phong Nha Caves. Son Doong Cave is considered one of the huge caves of the world. It is in Phong Nha – Ke Bang National Park with more than 7km long.

Besides, Quang Binh is the land for many historical-cultural relics namely Hoang Phuc pagoda, Dao Duy Tu rampart, Dong Hoi citadel, and the citadels of the Ngo, Trinh, Nguyen Dynasties. Quang Binh is also a civilized land with the cultural archaeological site of Bau Tro, Phu Luu bronze Drum, which existed in the same era as Dong Son Bonze Drum. Besides the wonderful natural landscape, the long-standing historical relics, Quang Binh is home to many famous persons who achieved excellent results in education, military, social-cultural issues such as Duong Van An, Nguyen Huu Canh, Nguyen Ham Ninh, Vo Nguyen Giap, etc. Quang Binh belongs to the bio-diversified area of North Truong Son - where multiform flora and fauna system has been developed with precious species. This is also an advantage for Quang Binh to develop eco-tourism. Like residents in coastal areas, Dong Hoi City and Le Thuy people in Quang Binh annually organize boat races on the National Day (2nd September). These boat races have taken place for more than one hundred years. 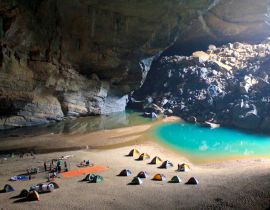 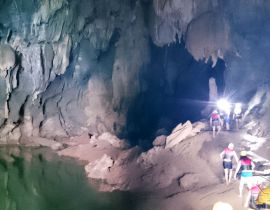 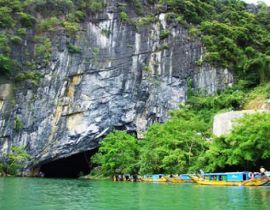 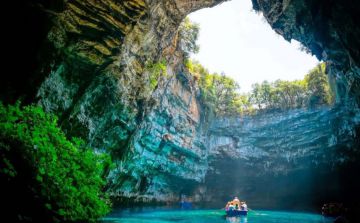