Quang Ngai's topography is dominated by a large plain along the coast and in the center of the province and by mountains and hills in the west and along its borders with Quang Nam and Binh Dinh provinces. Lowlands extend further inland along Tra Khuc River. The province's highest peak is at 1630m in the west of the province near the border to Quang Nam. The coastline is relatively straight in most of the south and central part of the province (unusual for the South Central Coast), but features several capes north of Quang Ngai City. The province' largest river is the Tra Khuc. Other important rivers are the Tra Bong in the north and the Ve River in the south of the province.

Quang Ngai province is located in tropical monsoon region. The province’s climate has the features of central region’s climate. The annual average temperature is 26oC. The rainy season is from August to January of the next year.

If you plan a trip to Vietnam, Quang Ngai is famous for the cultural vestiges of Chau Sa Citadel, Ong and Mai Son pagodas, Sa Huynh archaeological relics. The beautiful landscapes are An Mountain, Thien An Mountain and Tra Khuc River, Co Luy Commune under coconut trees, Ly Son island, Sa Huynh and My Khe beaches. Sa Huynh Beach is well-known with clear water, golden sand and pine trees. My Khe Beach is the most beautiful beach in Central Vietnam. It has beautiful white powdery sand, gently waves and poplars forest. Coming to there, tourists have chance to visit old battlefields with popular names like Ba To, Tra Bong, Ba Gia, Van Tuong and Son My. Nging Ong Festival is the biggest water festival of its kind, held by coastal fishermen in Quang Ngai Province. For a long time, the Whale has been considered a sacred creature of the sea and the savior of offshore voyagers. The worshipping of the Whale was a tradition of the Cham people. It is held at the beginning of the fishing season in almost every fishing village, the exact date depending on the area. 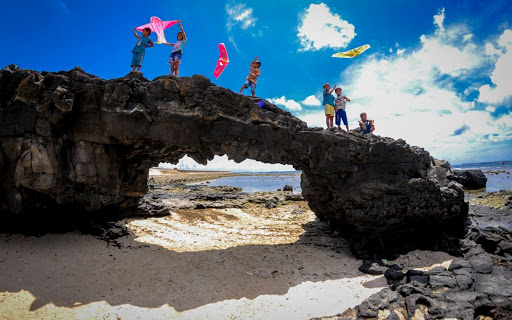