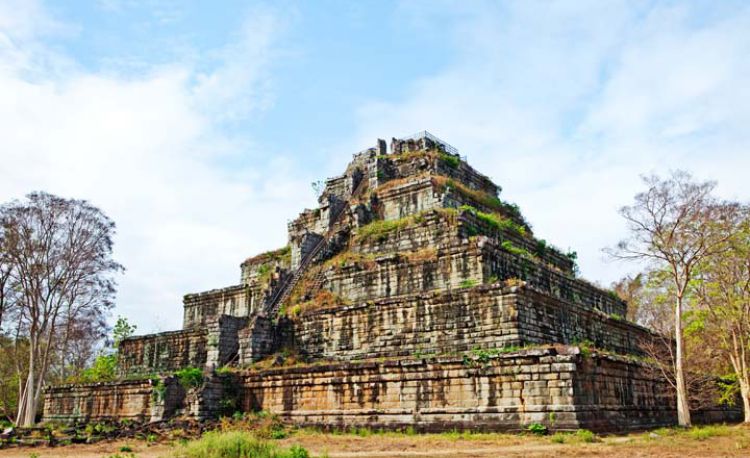 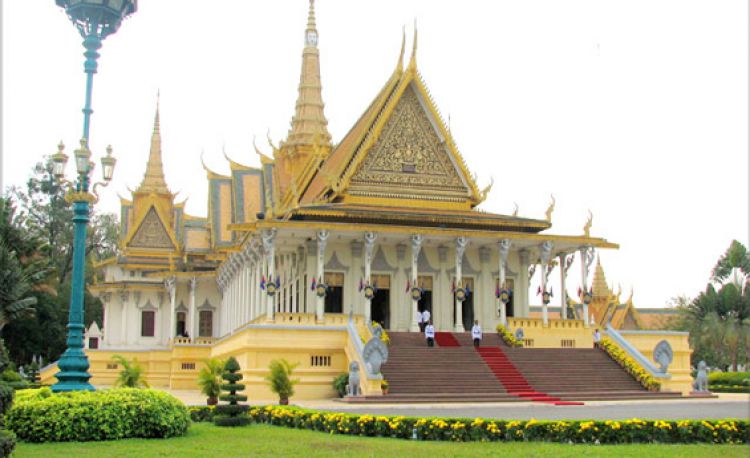 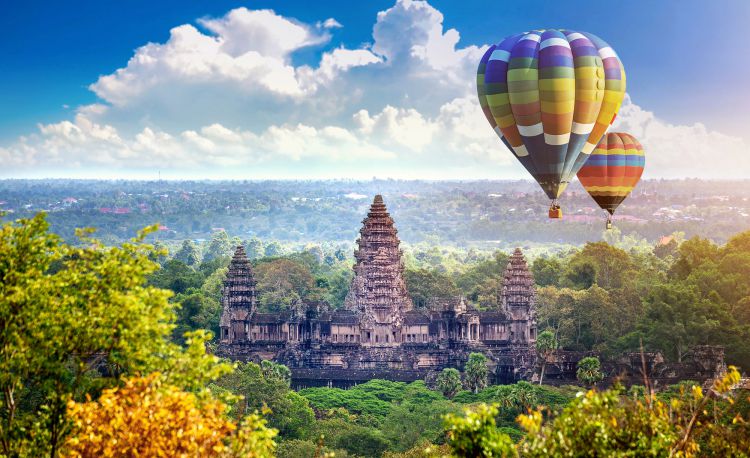 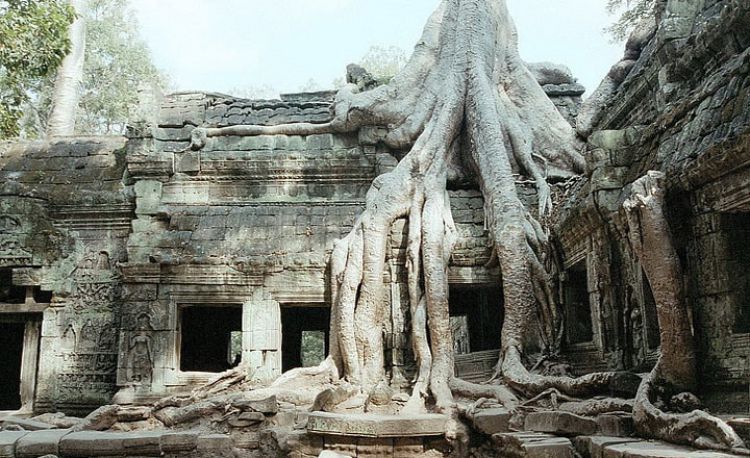 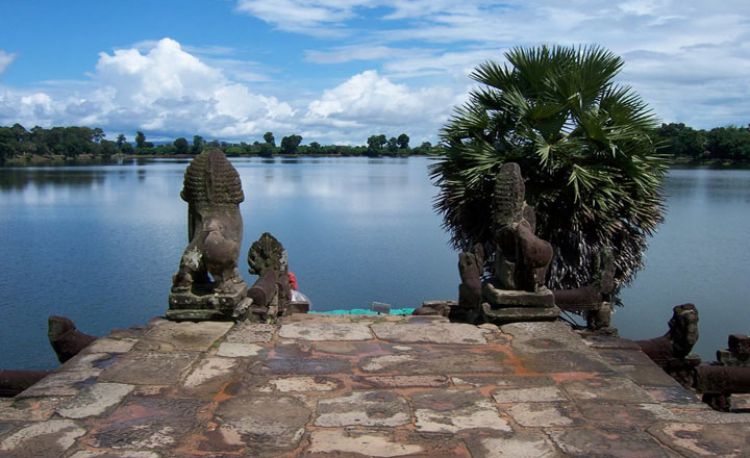 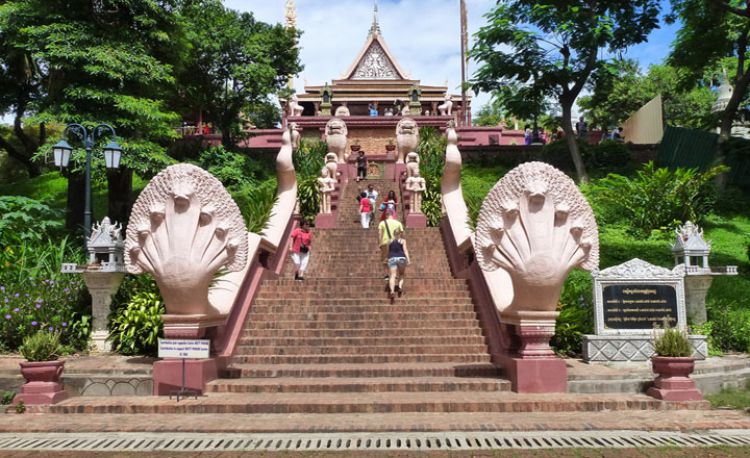 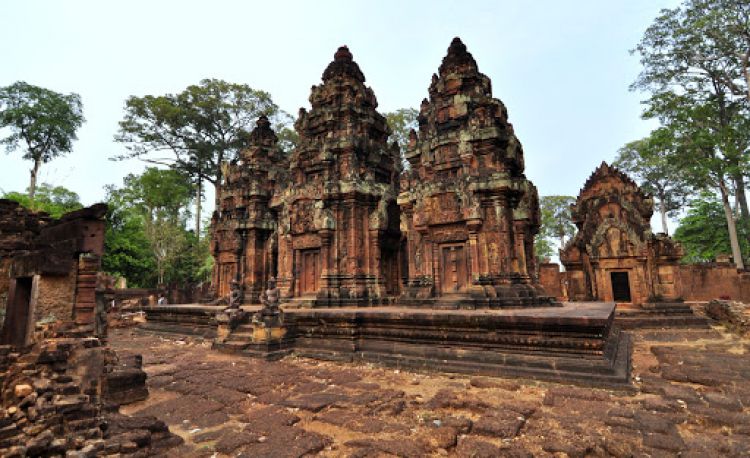 Check in at hotel and rest at leisure

Dinner is not included and night at hotel in Phnom Penh.

In the morning, head out to the Choeung Ek Memorial, where a stupa made up of some 8,000 human skulls marks the site of the infamous Killing Fields. This was the execution ground for the torture victims of TuolSleng and standing in this peaceful setting it's almost unthinkable to imagine that to date nearly 9000 corpses have been exhumed from the area. Confront Cambodia's tragic past on a guided tour of the TuolSleng Genocide Museum, a former school which served as a Khmer Rouge torture center. It's estimated that more than 20,000 people were held and tortured here. Lunch not included

In the afternoon, visit the National Museum. Housed in a beautiful traditional building, it contains many outstanding examples of Khmer craftsmanship. Learn about a brighter period in Cambodian history with a visit to the Royal Palace and Silver Pagoda. Explore Wat Phnom, a peaceful temple situated on a hill for which the city is named. According to legend, a 14th-century woman named Penh found sacred Buddhist objects in the nearby river and placed them here on the small hill.

Dinner not included and night at hotel in Phnom Penh.

This morning we leave early by private bus for our trip to Kratie. En route, we pass through Skuon (a small town famous for its tasty spiders), where it's possible to sample an eight-legged snack. It's recommended that you eat these furry arachnids as you would a crab, by cracking the body open and pulling the legs off one by one - delicious! Kratie is a picturesque town on the banks of the Mekong. Until recently Kratie was a strategic trading port on the river between Phnom Penh and Stung Treng. Both the French and Khmer Rouge found the town useful and there are a number of French colonial buildings that remain. Board a local boat from Kratie waterfront to Koh Trong for our island homestay. Approximately 280 families call this 6km island home.

Depending on the season and the height of the Mekong River we may need to walk up a stretch of beach and then take a local bike to our destination. The island is famous for growing pomelo (supposedly some of the best in Cambodia), rice and other agricultural products. Our homestay is a wonderful opportunity to witness everyday Cambodian life and in the evening we enjoy a traditional-style dinner. Facilities are basic and multi share with mattresses, bedding and mosquito nets all provided. Underneath the house a few hammocks are strung around making this a very scenic place to unwind.

A 9km loop road around the Koh Trong Island’s perimeter provides opportunities for us to leisurely cycle through traditional Khmer villages, fruits orchards and rice fields while observing the daily rituals and routines of traditional village life.

We will leave Koh Trang Island in the mid afternoon to Kratie City. We wander down the river boulevard and take a break for lunch before driving to Kampi Reserved Center where you see the River Dolphins.

Afterwards we travel to Stung Treng situated on the banks of the San River (which flows into the Mekong River a few kilometers out of town). Check in at hotel + night in Stung Treng.

This morning we start early for a full day of activities. Travel to the village of Ou Svay and catch a local boat close to the famous Sopheak Mitt Waterfall in the Mekong River on the Cambodia-Laos border. We then hike back to Preah Rumkel where we enjoy a simple local lunch cooked by the community.

Afterwards we have a unique opportunity to view the rare Irrawaddy dolphins from our kayaks at the nearby Anlung Cheuteal Dolphin Pool. Enjoy kayaking down the river through the spectacular flooded forests to Veun Sien village. (1.5-2 hours trekking, 2.5-3 hours kayaking)

Return to hotel for the night.

This morning we set out on our journey to Preah Vihear Province travelling through the wilds of Cambodia.

We will stop for a short visit at the Tbeng Meanchey city before driving on to SAEM Town where you check in hotel. Lunch not included

In the afternoon, drive up Preah Vihear Mountains to see the UNESCO Temple Sites of Preah Vihear, standing on the hilltop of Dangrek Mountains Range. Down below is the border of Cambodia – Thailand.

Drive back to hotel for the night at hotel in Saem.

Your final destination today is Siem Reap, land of Angkor. However, we will not miss one of the most important temples along the way, Koh Ker temple Group, known as Pyramid of ASIA. We will spend time walking around this nice temple, surrounded by small jungles, and big trees. Lunch not included

Arrive in Siem Reap, check in at hotel for the rest of your trip.

Dinner is not included and overnight at hotel.

Visit the antique capital of Angkor Thom (12 century): the South Gate with its huge statues depicting the churning of the ocean of milk, the Bayon Temple, unique for its 54 towers decorated with over 200 smiling faces of Avolokitesvara, the Phimeanakas, the Royal Enclosure, the Elephants Terrace and the Terrace of the Leper King. Lunch not included

Visit to the most famous of all the temples on the plain of Angkor: Angkor Wat. The temple complex covers 81 hectares and is comparable in size to the Imperial Palace in Beijing. Its distinctive five towers are emblazoned on the Cambodian flag and the 12th century masterpiece is considered by art historians to be the prime example of classical Khmer art and architecture. Enjoy wonderful sunset from the top of Pre Rup Temple.

Dinner is not included and night at hotel.

Visit to Banteay Srey, known as Citadel of Women or a Pink Temple, and Banteay Samre Temples

Visit to the unique interior brick sculptures of Prasat Kravan, SrahSrang ("The Royal Baths" was once used or ritual bathing), BanteayKdei (surrounded by 4 concentric walls), Ta Prohm, one of the area’s most beautiful temples. Ta Prohm has been relatively untouched since it was discovered and retains much of its mystery. NeakPean, a fountain built in the middle of a pool (representing the paradisiacal Himalayan mountain-lake) and Preah Khan temple, Built by the King Jayavarman VII. Preah Khan is, like Ta Prohm, a place of towered enclosures and shoulder hugging corridors. Unlike Ta Prohm, however, the temple of Preah Khan is in a reasonable state of preservation and ongoing restoration efforts should maintain and even improve this situation. Dinner is not included and night at hotel.

In the morning, we will enjoy a boat ride on the Tonle Sap Lake at Kampong Phluk Village. This is the largest permanent fresh-water lake in South East Asia and flows into Tonle Sap River, joining the Mekong in Phnom Penh. We will see a fishermen's "floating village" with floating schools, floating police station, etc. It is same as a big village floating on the lake, and the "village" move from place to place following water levels and current. Lunch not included

Transfer to Siem Reap airport for flight to next destination.