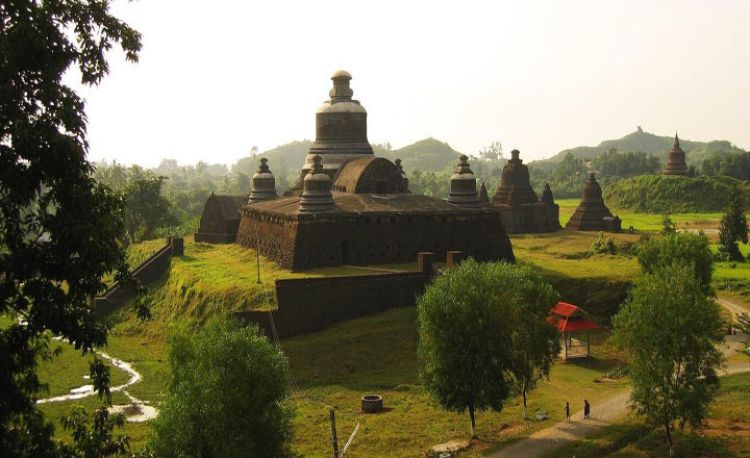 Arrive at Yangon International Airport and welcome by our tour guide. Check in to hotel. Yangon sightseeing includes; Chaukhtatgyi (Reclining Buddha) Pagoda a colossal reclining Buddha, Kandawgyi Lake which is closed to the city center and is a good place for a walk. This lake is most attractive at sunset when the glittering Shwedagon is reflected in its calm water. And visit colonial style buildings surrounding Mahabandula Park. Then drive to stroll through a narrow street of Chinatown including the short visit to Tao Temple. Then, shortly before sunset, the 107 meters high golden stupa of Shwedagon Pagoda will glitter in the soft light of the early evening. Overnight at hotel in Yangon.
Day 2: Yangon – Sittwe – Mrauk U (B)

After breakfast at hotel, transfer to airport for flight to Sittwe, the capital of Rakhine State. On arrival at Sittwe airport, transfer directly to jetty for departure to Mrauk- U by private with the background of Kaladan River view and paddy field. It will take 5 to 7 hours (depending or river current and boat) to get Mruak – U. On arrival of Mrauk U jetty, transfer to hotel and overnight at Mruak U. (Mrauk U, it was a capital city founded by King Min Saw Mon in 1430. It was the last capital of the powerful Rakhine Kings where the Rakhine had its full bloom. There were 48 kings in Mrauk U dynasty ruled over for 355 long years. This great city is built in a beautiful valley and surrounded by high mountain ranges described by Manrique who was a Portuguese missionary in 1630. But unfortunately, it came to its end day. That is two serious earthquakes in 1761 and 1762. In 1784 Rakhine was occupied by Burmese King Bodawpaya. Another point is after First Anglo-Myanmar War; in accordance with Rantapo treaty, Rakhine and Tennessarim were annexed and Rakhine became part of India.)

After breakfast at hotel , visit to Wethali (Vesali) by car, which lies 6 miles to the North of Mrauk U. According to the Rakhine History, Vesali was founded by King MahataingCandra in 327 AD. The archaeological department reports that Vesali was a city belonging to the main period from 4th to 8th century which was confirmed by the findings of excavation at Vesali. The area of the city is about 2.7 square miles and then see Vesali Su TaungPyae (wish-granting) sand-stoned Buddha image (17 feet high) and old place site. Now this place-site already turned to village. Proceed to Danyawaddy City where there is replica of Mahamuni Buddha Image. Danyawaddy City is 16 miles north of Vesali and 21 miles north of Mrauk U. The earliest old city in Rakhine (B.C 582 to 326 AD). In 1824, King Bodawpaya occupied Rakhine and took away Mahamuni Buddha image as a trophy. Original Mahamuni Buddha image is Mandalay.

Visit to Shittaung temple build by the thirteenth king of Mrauk-U dynasty called Minbargyi. Shittaung meaning is 80,000 Buddha images in anticipation of Buddha who will come into the future. Another name of this temple is Yan AungZaya, meaning is in memory of quelling the Portuguese attacked in those days. Inside the pagoda is like a amaze and Rakhine costume, manner and tradition, in the manners of wrestling, boxcing, dancing and some of 550 jataka (earliest lives of Buddha) in relief can be seen there and then very close to Shittaung temple is Andaw Thein Ordination Hall in which Buddha tooth-relic was enshrined. It is said to have been obtained from Sri Lanka by King Minbin (1539-1542AD) visit to Dukkan Thein Ordination Hall build like a fortress. It is one of the Rakhine Museum because there are sixty-four kinds of hair style in relief and see also Langbankpyauk Pagoda, locally known as " plate pagoda" because there are some glaze flowers like a plate. Overnight at hotel in Mruak U.

After breakfast at hotel, go to Ngagya Jetty by jeep (20-30 minutes). From there we visit to Chin Village by boat (72km- 2 ½ hours). On the way you will find the creek is shallow (about half meter). Sometimes, you will have to see even if the ground of creek and surrounded by bamboo forest. At there, you will find women take tattooed on their face owing to their belief. Streaky tattooed face didn't practice anymore. The greater number of houses in the villages is made of bamboo. Enjoy walk through their villages on the hill and poetic surroundings. Packed lunch is highly recommended. In evening, we arrive our hotel back. Overnight at hotel in Mruak U.

After breakfast at hotel, visit to Mrauk U market, have a look ways of life of rural people and then archaeological museum in which there are ancient stone slab and glaze as well as a model of Mrauk U attached with the Palace site where the kings of Rakhine once had hid private chambers and reception rooms and proceed to Koethaung Pagoda (90000 Buddha Images) surrounded by paddy field. The biggest in size among the pagoda in Mrauk U Legend say it is said the king build that pagoda finished within six months because he was afraid to die within six months. After that, not very far from Koethaung, visit to Pisei Pagoda. This pagoda belongs to Laymro dynasty (9-15 century) as well as Mrauk U dynasty on the small hillock and proceeds to Letsekan Lake (Royal hand-washing Lake). In ancient time, this lake supply fresh water for the population of the city. Besides, if enemies penetrated into the city, the waters would be released, drowning the invaders. The sandstone lake gate can be seen till now. Supply the fresh water for the population of the city still in use. Bandoola Monastery like museum in which countless Buddha Images and priceless jewelry were donated. Attached with Bronze Buddha image called Sandamuni (Second Great Image). This Buddha image once had seen stonage. Later, luckily, it was found that it is, indeed, Bronze image and proceeds to Sakyamanaung Pagoda guarded by two brother huge giant’s status. Continue to bell-shaped BodiShwegu Temple in which along the walls of inner side of the passages are decorated with stone sculptures depicting some of 550 Jatakas of Buddha. These sculptures are like the mirrors of Rakhin's culture and see also Pitakataik (library) which had been used as a depository for the Buddhist scriptures in ancient time. Sunset at Harrestaung Hill. Overnight at hotel in Mrauk U.

After breakfast at hotel, return to Sittwe by boat. On the way, we will stop for Myo Village, noted for their tradition Khami Cloth which is very neat and handsome. On arrival late afternoon in Sittwe. Transfer to your hotel. Leisure at hotel for the rest of the day.

Sittwe is the capital of the Rakhine State and its former name is Akyab, after first Anglo-Myanmar War, British troops shifted their headquarter from Mruak U to Akyab (Sittwe). From then on Akyab (Sittwe) became a Commissioner's headquarter as well as a district headquarter. Sittwe word derived from Sitay "Si" meaning is "military". " Tay" meaning is "camp". So Sittwe meaning is a place where military camp stationed. Sittwe is a lovely town situated at the mouth of Kaladan River and Bay of Bengal. Being a sea side place, the climate of Sittwe is moderate. It is lying East Longitude 92? 56` and North Latitude 20? 7' and 22? 17'. Overnight at hotel in Sittwe .

After breakfast at hotel, we visit to Sittwe Market where people come and sell their fishes and farming products. At the market you can see Rakhine traditional longgyi. It is popular not only on Rakhine but also the whole Myanmar. It the time permit, visit to Buddha Image with golden face called Payagyi Temple, Cultural Museum and Fish Cracker Cottage industry. Transfer to airport and flight back to Yangon. Overnight at hotel in Yangon.

After breakfast at hotel, morning visit Botataung Pagoda and Nanthida Jetty and watch the traffic on the Yangon River; here luxury cruise liners come to berth at this jetty quite often. Shopping at Bogyoke (or) Scott Market a famous shopping center to enjoy display of Myanmar handicraft (Note: Market is closed on Mondays and Public Holidays). And proceed to visit Kaba Aye (World peace) Pagoda, it was also known as the " World Peace Pagoda" and Mahapasana Cave, where the sixth Buddhist synod took place. On the way visit to Kyauktawgyi Pagoda also known as LawkaChantharArbayarLabamuni Buddha Image at Minn Dhamma Hill, there is an Elephant house where the three white elephants are kept. And then transfer to Yangon International Airport for Departure.