Situated about 320km to the northwest of Hanoi, Son La town is often used as a half-way overnight stop on the route to Dien Bien Phu. The province encompasses a total area of over 14.120 km2, which makes it the third largest province of Vietnam. Son La shares the common border with Yen Bai, Dien Bien, Lai Chau provinces in the north, with Phu Tho, Hoa Binh in the east, with Dien Bien in the west, and with Thanh Hoa province, Laos in the south. The province lies at the height of 600-700 meters above sea level with mild and temperate climate condition. The province is not so well-known for tourism destinations except for the Moc Chau Plateau and Son La prison.

Topography of Son La province is mainly mountains and highlands. Network River here is quite special thick, water is plentiful, the potential of hydropower. Mineral resources of the province are quite diverse and so rich industrial Son La has many prospects.

Son La features a tropical monsoon climate, which is characterized by torrential rains in the summer (from May to September) and cold and dry in winter (from November to January). Like many provinces in Vietnam, Son La also suffers from the influence of the dry and hot wind from Laos in summer which makes the weather intolerable sometimes. Son La’s climate is divided into two distinct seasons. Winter lasts from October to March of the next year, and summer from April to September. The annual average temperature is 21.4oC (the highest temperature is 27oC and the lowest one is 16oC).

Son La Highland is most famous for its imposing Moc Chau Plateau, which is an ideal place for milk-cow breeding, tea and fruits planting. Not only that, Moc Chau Plateau will not disappoint travelers with its wide range of natural wonders like Bat Cave (Hang Doi), Brassiere Waterfall (Thac Dai Yem) and immense forests of pine behind soft mist. It would be a big mistake if ones come to Son La but miss to visit this wonderland. Another indispensible destination is the gigantic hydroelectric dam of Son La, the biggest hydroelectric dam of Indochina. Right in the central of Son La City, tourists would have chance to visit the most renowned relic of this province, which is Son La Former Prison and Museum. This site is preserving historic objects – evidence of a difficult but heroic time during the war, and also exhibiting the historical and cultural tradition of 12 ethnic groups living there. Attending tours to Son La, visitors may have unforgettable experiences by visiting cultural ethnic minorities’ communes and enjoying traditional festivals. One of the most famous festivals is Hoa Ban Festival of the Thai ethnic group and is also called “Xen Ban Xen Muong”. It is organized every year (2nd lunar month) when the Ban flower begins to blossom, coloring the mountains of North West Vietnam in white. At the festival, people pray for abundant crops and luck as well as wishing a peaceful and materially secure life.

Son La is 320km to the Northwest of Hanoi, along National Highway No.6, through Dien Bien so tourist may visit this historic city on the way as well. For romantic travelers, going on boats from Hoa Binh Lake to Son La is a good suggestion. 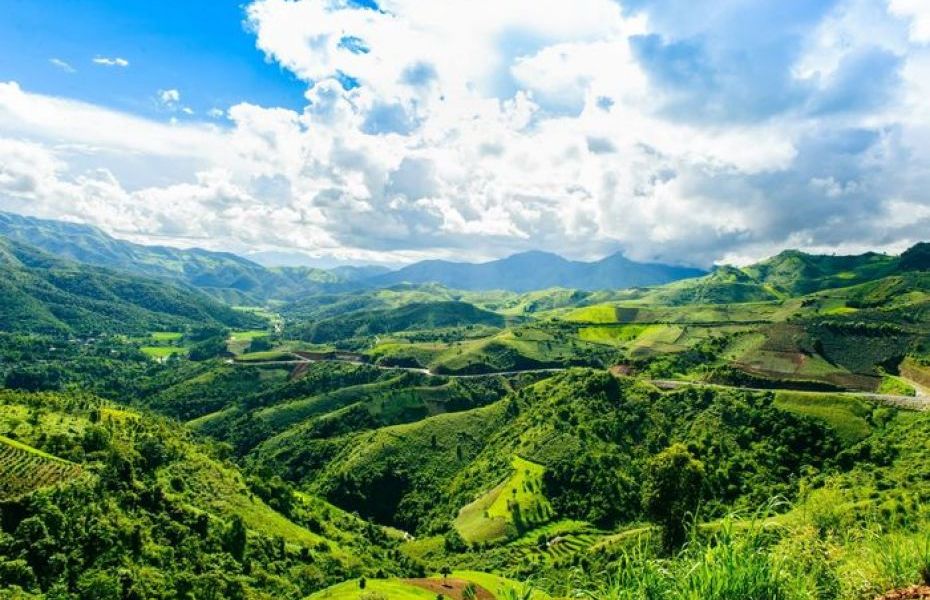